I’m starting a newsletter to update on future releases, appearances, and publications, as well as some free fun stuff. If you’re interested in (very occasionally) hearing from me, please sign up. As a reward, I’m offering a free copy of my novelette, His Lady’s Favor.

This seems like a good time to update my list of published works. For your enjoyment, with links. More coming soon!

I won Writers of the Future!

This is a bit late, but I am beyond thrilled to announce that I am the Third Place Winner for Writers of the Future, First Quarter 2020. My winning story, The Redemption of Brother Adalum, will be published in Writers of the Future Volume 37 next year. This is another “bear story” and I hope it will delight those of you who have enjoyed my previous entries in this universe!

My latest novelette, entitled “His Lady’s Favor”, is available now in the Summer 2019 edition of Deep Magic. I’m thrilled to share this story, which features magic, romance, and redemption.

Runesmith Rina Telassi’s one chance of finding a new patron is to make a good showing in the Crucible of Honor. For that she needs a runewielder — and the only person who might risk her untried armor is a man who walked away from the ring, and her, years ago.

His Lady’s Favor available on Amazon.com. 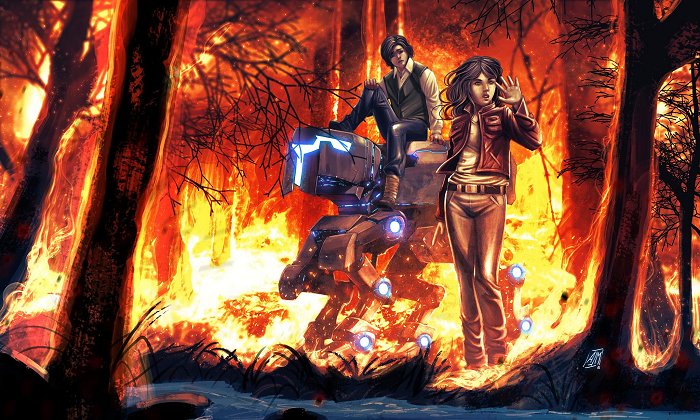 I awake. Someone pulls a parachute off my head and I see the world again. The briefing loads into my active memory, where we are, why, weather reports, but none of it matters. All that matters is fire.

The grass fire creeps along the hillside above us. I draw my Pulaski from my flank sheath, my four long metal fingers dark against the golden wood of the axe-and-hoe combination tool. The wildfire is in the dry cheatgrass ahead of us, three-foot-high flames lapping along the ground. Dark smoke billows upward, blotting out the brilliant blue sky and the spiky granite teeth of the mountains fencing this remote valley. There’s twenty of us: fifteen lean men, four wiry women, and me, the four-legged metal monstrosity they call NK7 after the first three letters of the radio call sign assigned to my chassis.

I’ve counted a hundred and forty days on fires since I first deployed. I think it’s been three years but I’m not sure. Something in my cybernetic brain doesn’t do well at making memories. Facts, I know. Faces and names, how to fight fires, a simple tally of days on an incident, I can recall. Bigger things, like how often I’ve seen August burning red on the mountains, are as lost to me as the taste of bread or the feel of a bed or human touch. The things I knew before I became a centaur-bodied cyborg. I remember them less every day.

On Saturday May 21st, from 1-3 PM, at the Barnes and Nobles in Reno Nevada, come meet me and get a signed copy of Writers of the Future Volume 32! There will be two of us authors present and we’d love to talk about writing, the contest, our stories, whatever strikes your interest! 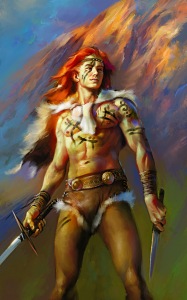 This is a story in the same universe as “The Golden Knight”, but about 35 years earlier. There’s a bear warrior – two bear warriors actually – and I get to introduce another of my combat magics, Methlan skinwards. And what are those? Take a look at the art that goes along with my story…

Not hooked yet? How about a sample…

When her horse stumbled near the edge of the bluff, Yvina leaned against its neck and prayed that the animal had merely missed its footing. The roan took another two steps and then faltered. Yvina glanced over her shoulder. Her pursuers rode along the treeless top of the last ridge, maybe two miles back. Too far below her, the river glinted in the early morning sun. She was exhausted from riding all night. She hadn’t eaten in a day, and her tongue was thick with thirst. Acrid fear and horse- sweat clogged her nostrils. She’d never make it but had to try. She urged the horse on. It’s no use, her bear whispered inside her mind. He’s spent.

Can you give more of your strength to him? she asked. She’d already shared the bear’s power with the horse once. It was a trick reserved for dire straits, where the risk of death was stronger than the risk of having your soul come unraveled.

His tendon is strained, the bear said. I don’t have enough strength for that.

If I drained us both, it might work, but then we’ll be helpless, the bear warned.

Then she’d save her strength and the bear’s for when her pursuers caught up. She slid off the horse onto the rocky ground, avoiding a clump of spiky grass. At least she had the short sword she’d taken off one of the Methlan warriors earlier. She wasn’t going to let them take her alive. And she wasn’t going to die easily. The horse took three steps before collapsing. Yvina spared a thought for the beast but there was nothing she could do for it. She scrambled down the steep slope, her shift catching on the prickly bushes, heading toward the river. Even if she reached it and crossed, she wouldn’t be safe. Her brother’s army lay miles away. This was such a stupid way to die, after everything she and Aradon had been through. If only Aradon had listened to her warnings. Her brother was a fool. Now he was a fool in chains, surrounded by enough Methlan warriors to defeat even him. Was Aradon even still alive?

Worry about us first, her bear said.

I wish you had teeth and claws to help me fight, Yvina said. Now she was halfway down the steep slope. The scent of water made her parched mouth tingle. Her feet kept up a steady trot. Her eyes scanned the rocky hillside for safe footing. She could try going straight down the slope, while the riders would have to pick a path their horses could manage.

I’ll give you everything I can, the bear promised. It was a comforting presence in her head. We’ll make them pay.

For a master list of links, consult WOTF32.com or just buy on Amazon

Writers of the Future

On April 10th, 2016 I was honored to be included in the gala event for Writers of the Future 2016. As the Published Finalist for this year, I was given the same opportunity as the other winners to attend a workshop taught by some of the best writers of our genre, and then the week culminated in this amazing ceremony.

In this video, my section starts at about 2:02:10. The other winners are all fantastic people and I was honored to share the stage with them all.

My novelette, Swords Like Lightning, Hooves Like Thunder will appear in Writers of the Future Volume 32 which is now available for preorder! The book has twelve other original short stories from up-and-coming authors as well as a full-color illustration for each story. No, I haven’t seen my illustrati 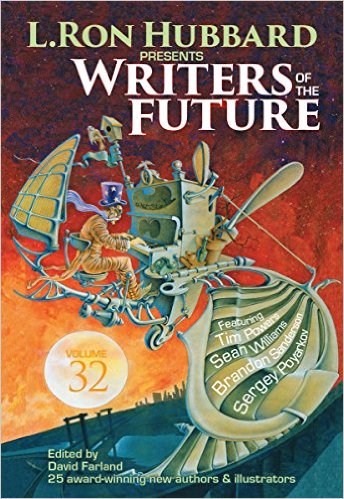 Why should you get this? Well, if you liked my “Golden Knight” story, Swords Like Lightning contains a lot of the same elements, only more of them. Two bear warriors. Multiple fights. A brand-new landscape and a culture I didn’t show in “Golden Knight”: the plainsriding Methlan, who have their own unique magic and legends

“I hope you haven’t sold Swords Like Lightning, Hooves Like Thunder elsewhere, because we want to publish it in this year’s Writers of the Future anthology!” the voice at the other end of the line said.

After peeling myself back off the ceiling I assured her that I had held it back in case they wanted it and would be delighted to have it included. And to come to LA for the Writers of the Future gala. And all the other perks that come with being a winner. But mostly, to have this story published.

It’s set in the same world as my “Golden Knight” story. There’s a bear warrior – two, in fact! There’s combat, and adventure, and romance. At 15,000 words I think it feels like a very satisfying length. And sometime later this spring – May, I believe – it will be available in Writers of the Future Volume 32 from Amazon or a bookstore near you.